LIVE from USRowing with Ted Benford, ED of Community Rowing

#ReadyRowUSA correspondent Brenda Balenger talked with Ted Benford, executive director of Community Rowing in Boston, about CRI initiatives aimed at increasing diversity in rowing, “one club at a time.” Ted started his relationship with CRI more than  25 years ago as a volunteer and coach and then went on to serve as president of the board and as a trustee. In May of 2016, Ted was hired as Director of Operations and served as Interim Executive Director until his selection as Executive Director in August of 2018.

Listen to our podcasts for the episode hashtag and post it on social media for a chance to win gadgets, gear, & rowing services! And please patronize our fabulous sponsors – they make our podcasts possible! You’ll find discounts and deals on the sponsor page.

Outside of CRI, Ted has worked extensively in higher education, started his own company and worked in consulting and special project partnerships with senior level leadership of Fortune 1000 companies. He has an extensive coaching resume spanning club rowing, corporate rowing, adaptive coaching as well as coaching and leading Division III and Division I Lightweight and Division I Heavyweight men’s rowing programs. Ready, Row! USA is media partner of USRowing for the Convention. Producer: Charlotte Pierce 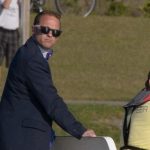